Rameswaram is a famous religious destination situated in the state of Tamil Nadu in India. The distance of this place from Chennai is 572 km. This town is also famous for A.P.J Abdul Kalam who was born here. It is situated at the very tip of the Indian Peninsula. It is also known as Rameswaram Island. Rameswaram is administered by a municipality which is established in 1994. 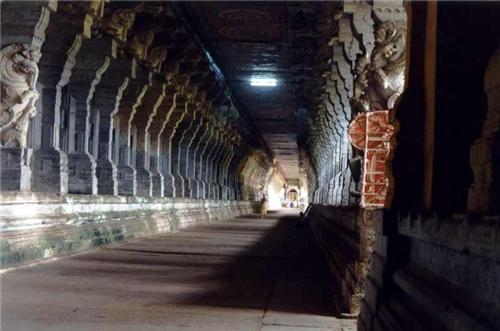 Rameswaram: Past and Present

The meaning of Rameswara is “Lord Rama” in Sanskrit and the city name is derived from this word. According to the Hindu epic” Ramayana”, Lord Rama, prayed to Lord Shiva here to absolve any sin he might have committed during his war against the demon king Ravana in SriLanka. Rameswaram in the past is being used as the transit point to reach SriLanka (which is known as Ceylon historically). During early 15th century, the present day Ramanathapuram, Kamuthi and Rameswaram were included in Pandya dynasty. In 1520 CE, the town came under the rule of Vijayanagara empire. In 1795 CE, Rameswaram came under control of the British East India Company and was annexed to the Madras presidency. After 1947, the town became a part of Independent India.
Rameswaram is a religious place which is administered by a municipality established in 1994. The town covers an area of 53 square kilometres and had a population of 50,000 plus as of 2001. Tourism and fishery employ the majority of workforce in Rameswarm. Click here to learn more on the history and mythology of Rameswaram


Geography and Climate of Rameswaram

The island is spread across an area of 61.8 square kilometres and is in the shape of a conch This city has an average elevation of 10 metres (32 feet). Around 74% of the soil in Rameswaram is sandy due to the presence of sea and it has many islands surrounding it. The beach of Rameswaram is featured with no waves at all and looks like a very big river and the sea waves rise to a maximum height of 3cm.
Rameswaram has dry tropical climate with low humidity. The average rainfall of this place is around 75.73mm, mostly from north east monsoon from October to January. The highest temperature ever recorded was 37 degree C and the lowest was 17 degree C. Click here to learn more on the geography of Rameswaram

This is a Hindu pilgrimage centre. Hindus form the visitor base of the city. Thousands of devotees visit this place every year. The people of Rameswaram are religious minded and friendly in nature. It is a cultural city with lots of festivals celebrated all year round. Click here to read more on the culture of Rameswaram 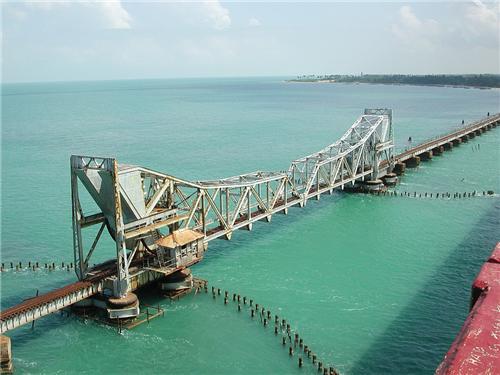 Besides pilgrimage, Rameswaram Island has several places which are ideal picnic spots. There are beautiful beaches at Olaikuda, Dhanuskodi and Pamban. Various winter birds migrate to Rameswaram island during winter. Rameswaram is considered as the main fishing center of Tamil Nadu State. Click here to read more on tourism in Rameswaram

The cheapest and the easiest way of transportation in Rameswaram is the public buses. Auto rickshaws are widely available though the tourists should be aware about the charges of this auto rickshaws as they rarely run on meters and the price should preferably fixed before boarding the vehicle.