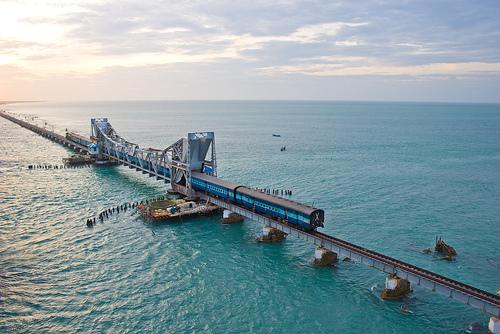 Rameswaram is a small temple town located on Pamban Island. It is 50 kilometres from the beautiful Mannar Island. The history of Rameswaram revolves around the Ramanathaswamy temple and this holy town remains as a centre spot to reach Ceylon (Sri Lanka).

Role of Cholas and Pandyan Dynasty in Rameswaram

Situated in the extreme south end of India, Rameswaram remains as one of the greatest and holiest pilgrimage places in India. Most of the Hindu devotees would always have a dream to visit Rameswaram at least once in their life time. It is mostly because of the Ramanathaswamy temple that is located close to the sea on the eastern face of the Pamban Island. The island is connected with the major land by two ways, a road bridge and a rail bridge. It is rightly connected at the mandapam. In ancient days, this holy place was just a thatched hut. Over the years, it gradually developed into a magnificent and massive structure. The town has witnessed fluctuation of various dynasties that ruled this place of South India. The great Chola king- Rajendra Chola ruled the town for short period (1012 – 1040 CE). The title ‘Sethukavalan’ was given to the Jaffna Kingdom as he had close connections with the Pamban Island. Sethukavalan is actually referred as guardians of the Rameswaram. The state religion was Hinduism and they made munificent contributions to the famous town temple. Setu was used as in caption as symbol and it was used in the coins of the dynasty. Firishta had mentioned that the ruler of Delhi Sultanate and leader of Alauddin Khilji camp – Malik Kafur reached the Rameswaram town in the early 14th century for the political development despite stiff conflict from the Pandyan princess. Malik Kafur built up a mosque on the name of Alia al Din Khaldji in tribute to conquest of Islam. Until the 15th century, Pandya kings ruled the entire kingdom. It is believed till this present day that Kamuthi, Rameswaram and Ramanathapuram were integrated in the Pandyan dynasty.

Later, Rameswaram went under the control of Nayaks of the Vijayanagar kingdom around 17th century. After the fall of Nayaks, the Sethupathis who was the group leader position of the region occupied the throne. They spent the region funds generously on the architecture and arts of Rameswaram temple. This holy town holds strong Hindu mythology facts that attract large number of tourists from various destinations. Some of the most notable Sethupathi rulers of Rameswaram are Thirumalai Sethupathy, Udayan Sethupathy, Muthuramalinga Sethupathy and Raghunatha Sethupathy. They made huge contributions from their side in changing the temple to a great architectural ensemble. Soon after, in the middle of the 18th century this region was captured repeatedly by Chanda Sahib, Arcot Nawab and Muhammed Yusuf Khan.

In 1795, the entire Rameswaram city came under the direct rule of British East India Company, which was subsequently taken over by the Madras Presidency. After the Indian Independence in 1947, Rameswaram town became a division of Independent India.

The history of Rameswaram town is totally mesmerizing as it is in tradition and legends and bears witness to the purity of Rameswaram.