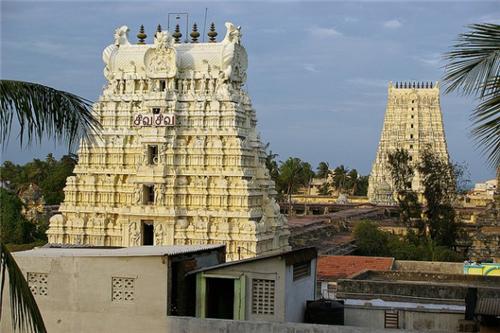 Ramanathaswamy temple, located at the heart of the Rameswaram is considered to be an important pilgrimage temple for the Hindus. Popularly known as Rameswaram Temple, the Ramanathaswamy Temple was expanded by the Pandya Dynasty during the 12th century. The principal shrines of the temple were renovated by Jeyaveera Cinakaiariyan of the Jaffna Dynasty. Ramanathaswamy Temple is one of the four holiest divine places for Hindus which is known for its longest corridor among all the temples in India. Everyday, thousands of pilgrim devotees visit the temple to worship the Lord Shiva Temple and seek the blessings. There are about 1212 pillars in the temple. 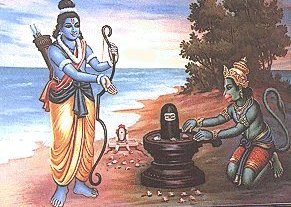 As per the Hindu epic Ramayana, Rama worshipped Lord Shiva and requested him to clear all his sins committed against the king Ravana. At this point, Rama directed Hanuman to get the largest lingam to worship Lord Shiva. It is believed that the Hanuman took a long time to bring the lingam and so Sita (wife of Rama) build a small lingam in the temple. After few years, Hanuman brought a lingam from Kailash called as “Vishwalingam”.

If you visit Ramanathaswamy temple, you will see two lingams at the entrance and inside the building. Lord Rama instructed the people to worship the Vishwalingam and then the sand temple. It is important to know that the temple was initially a small thatched place and later developed into a structure by Sethupathys of Ramnad. The total structure of the temple extends over an area of 15 acres with massive walls, gopurams and big Nandi. Further, the Government of Tamil Nadu and other volunteers implemented plans to renovate the entire temple into a good structure.

Mahasivarathri, Navarathri festival, Ramalinga Prathishtai, Thirukalyanam and Vasanthotsavam are some of the significant festivals celebrated in this temple. During the festival season, the temple authorities make special arrangements to create comfort for the Hindu pilgrims and visitors across the country. Apart from this, the Ramanathaswamy temple celebrates Diwali, Chitrapournami and Pongal with great thrill and enthusiasm.

In Ramanathaswamy temple, special theerthams and poojas are offered for the prime deity Lord Shiva. The temple’s holy water has the capacity to cure any kind of illness or purify the souls from sins. Some of the notable Theerthams include Soorya Theertham, Chandra Theertham, Ganga Theertham, Shiva Theertham, Sarva Theertham, Mahalakshmi Theertham, etc.

The temple remains open from 5 A.M to 9 P.M. Further, the temple authorities ensure to conduct various poojas at six different timings and they are mentioned in the following:


How to reach Ramanathaswamy temple

This temple is located on the Rameswaram island of Ramanathapuram district. Indira Gandhi Bridge, which runs for about 2 km associates the city to the temple’s mandapam. The nearest airport is Madurai.  Rameswaram is well connected by trains with all of the major districts in Tamil Nadu such as Chennai, Coimbatore, Madurai and Thiruchurapalli. By road, Rameswaram is connected to important cities of Madurai, Kanyakumari, Chennai and Trichy.


Explore more about Tourism in Rameswaram